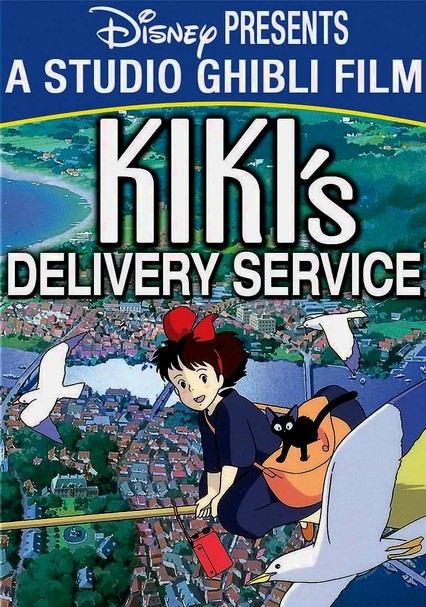 1989 G 1h 45m DVD
In director Hayao Miyazaki's gentle, animated adventure, young witch Kiki (voiced by Kirsten Dunst) moves away from her family to practice her craft, but she finds that making friends in a new town is difficult. With her cat, Jiji (voiced by Phil Hartman), in tow, Kiki puts her broom-flying skills to work for a baker's wife by starting an express delivery service. She quickly discovers, however, that she can't take her abilities for granted.

Parents need to know that Hayao Miyazaki's classic anime adventure is an ideal film for the entire family. Unlike some of his other movies that feature some potentially frightening characters or disturbing scenes, this film is a sweet coming-of-age adventure. Kiki, the 13-year-old protagonist, is a lovely role model. Yes, she's a witch, but she's a good one who doesn't manifest her magical powers in any way but flying. There's some mild flirting and a couple of close calls while Kiki's in the air, but otherwise this is a positive pick that could be a family classic.

Tombo continuously flirts with and expresses his interest in Kiki. He asks her on a date, calls her, and visits her several times. They ride a bicycle together, blush in each other's presence, and share one hug after a near-death experience. Jiji falls in love with a female cat who at first doesn't give him the time of day. By the end of the movie, Jiji and the cat have had kittens together.

Kiki comes close to falling off her broom during a wind gust and ends up falling through trees in one scene. She later incurs the wrath of angry crows who think she's trying to steal their eggs. Kids afraid of storms will be worried for her and Jiji as they fly through a rainstorm. Tombo nearly plummets from a great height, but is saved before he's seriously injured.

Some of the positive messages include keeping a positive outlook, being generous and helpful even when you don't have to be, valuing your family and friends, and staying true to your passions, whether it's art or baking or, in Kiki's case, flying. The movie also emphasizes that it's OK to occasionally feel out of sorts or second guess your talent, because everyone feels that way once in a while.