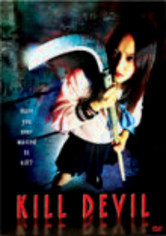 2004 NR 1h 26m DVD
After hiring a group of scientists to isolate the gene that compels people to kill, Japanese officials round up every young person with a predisposition to murder and take them to a deserted island to participate in a top secret experiment. But what the youngsters don't know could literally end up killing them: The government expects them to fight one another to the death. Yoshika Kato and Shunsuke Osaka co-star.