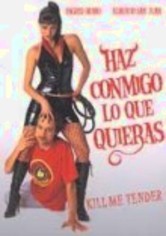 2003 NR 1h 38m DVD
Widower Nestor (Emilio Gutiérrez Caba) has developed feelings for Maribel (Ingrid Rubio), his housekeeper's daughter, and hopes to marry the girl even though she isn't interested. But after realizing she would stand to inherit the man's estate after he died, Maribel reconsiders and marries him. Things don't go as planned, though, when it appears Nestor's health in supreme condition, leaving Maribel to ponder other ways to get rid of him.