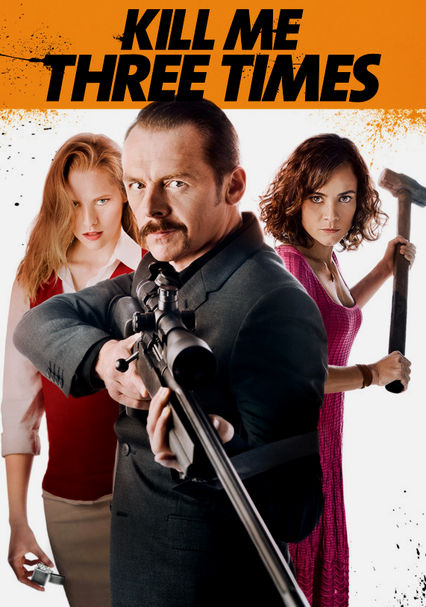 2015 R 1h 30m Blu-ray / DVD
Linked by a British assassin, three neo-noir tales mingle against the backdrop of an Australian coastal town, where the hit man arrives to bump off one Alice Taylor. But he soon discovers that he isn't the only person with Alice in his crosshairs.

Parents need to know that Kill Me Three Times is equal parts dark comedy and heist flick, with lots of bloody gun violence and a remarkably high body count (including execution-style killings). There's a lot of violence, blood, and weapon use; one character falls off a balcony and is impaled -- but survives. Characters also frequently use strong language ("f--k," "s--t," and more), alcohol, and cigarettes, and one deals with an online gambling addiction. A sex scene includes moaning and naked breasts. Although a couple of the stars will be familiar to teens -- Simon Pegg and Teresa Palmer -- this Australian indie is unlikely to capture much attention.

One brief sex scene that includes nudity -- naked breasts are visible, and there's moaning and a few edits that show the couple's bodies from different camera angles. Later, another two people watch a recording of the tryst on a smartphone. A woman takes a shower, but the camera focuses on her face. A married couple kisses on a bed while she's in a nightgown. Two different women kiss men who aren't their husbands.

People die in various ways, but most are executed at close range or die in shoot outs. Cars are covered in gasoline and set on fire and then left to burn with people inside. A man is pushed off a balcony and impaled upon falling -- but survives. Two different men strike women they're married to or in a relationship with.

No clear positive messages, as all the characters are assassins, cheaters, gamblers, and thieves.

Many scenes of Charlie smoking a cigarette and of Jack drinking.