Kill Them and Eat Them 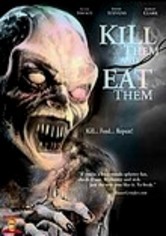 Kill Them and Eat Them

2005 NR 1h 20m DVD
Deep in the city's underbelly, the demented Dr. Gore (Sandy MacDonald) and his assistant transform kidnap victims into murderous skeletoids who feast on human flesh. As the evil scientist falls for one of his victims, his assistant carries out his own agenda. But who will save the world from the sinister mastermind and his army of insatiable cannibals? Francoise Snobel, Richard Archer and Lloyd Cameron also star in this tongue-in-cheek thriller.