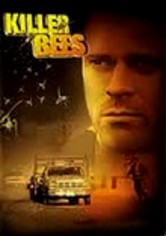 2002 NR 1h 35m DVD
When a truck crashes in a small town, releasing a torrent of angry killer bees, it's up to the sheriff (C. Thomas Howell) to convince everyone they're deadly -- but no one except a local beekeeper believes him. And wouldn't you know it? The bees have arrived just when the town's abuzz about the annual Honey Festival. Tracy Nelson (daughter of 1950s icon Ricky Nelson and sister of the hair-band duo Nelson) co-stars in this made-for-TV thriller.