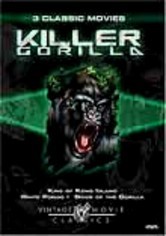 1945 NR 4h 30m DVD
Giant gorillas go wild in this triple feature starring angry apes. In King of Kong Island, an explorer braves the jungle to save a sexy native (Esmerelda Barros) from a mad scientist and his remote-controlled gorilla soldiers. Biologists hunt for a rare white gorilla thought to be the missing link in White Pongo (with Richard Fraser). And voodoo turns a plantation owner into a bloodthirsty ape in Bride of the Gorilla (with Raymond Burr).