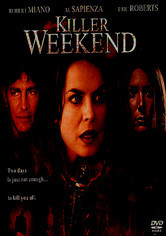 2003 R 1h 32m DVD
Things look pretty idyllic for three couples vacationing at a Santa Barbara beach house -- that is, until the body count begins to rise and the number of vacationers at the house begins to dwindle. It's like an episode of television's Survivor, as the remaining adults begin to forge alliances with each other and try to uncover the killer's identity before he or she strikes again.