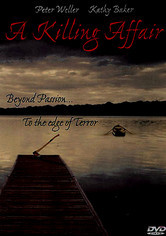 1986 R 1h 41m DVD
Peter Weller stars as Baston Morris, a drifter who arrives in an Appalachian town and confesses to widow Maggie Grisham (Kathy Baker) that he murdered her husband (Bill Smitrovich), a lecherous labor foreman, in an act of vengeance. But rather than cast out Morris, Maggie finds herself inexplicably drawn to him. David Saperstein directs this World War II-era drama based on a novel by Robert Houston.