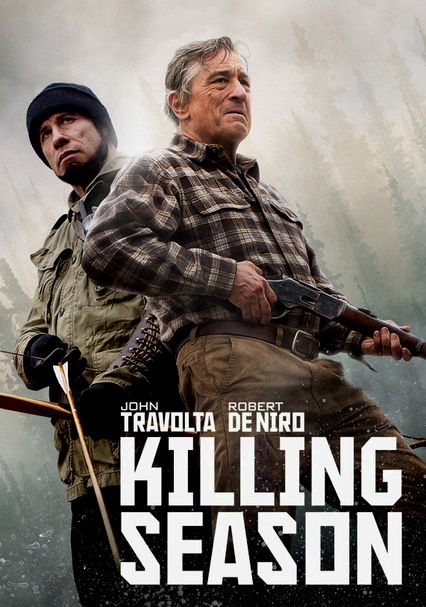 2013 R 1h 31m Blu-ray / DVD
Tormented by memories of combat in the Bosnian War, American vet Benjamin Ford seeks peace of mind deep in the Appalachian Mountains. But when a Bosnian vet of the same war comes to settle a score, a new war erupts in the American wilderness.

Parents need to know that Killing Season is a dark, mature thriller with war overtones that stars John Travolta and Robert De Niro. The main thrust is revenge, with various gruesome scenes of torture (often with blood/agony). Viewers also see some brutal, disturbing flashbacks to the Bosnian War. Language is fairly strong, with a few, pointed uses of "f--k" and "s--t." The characters tell a joke with some strong sexual innuendo. A bottle of Jagermeister liquor is studied, admired, and consumed, and the characters get drunk.

One character tells a joke with some strong sexual content (blow jobs, etc.) A voluptuous bartender shows some cleavage in a couple of scenes.

Some absolutely gruesome flashbacks to the Bosnian War, with piles of decomposing corpses, characters shot in the head at close range, and mentions of rape and burning bodies. One character is shot through the leg, with spurting, gurgling blood. He's then forced to push a metal stake through the hole, and he's hung by a rope from this wound. Another character is shot with an arrow through his face (his cheeks) and then tied up and tortured with salt and lemon juice. A character digs a piece of bloody shrapnel from his own leg and uses it to stab another man. Fighting with knives, a car crash, and various arguing and taunting.

The movie's main themes are revenge and torture, though both characters seem to be interested in "confessions" (either religious or just simply telling the truth), and once that happens, they seem to be satisfied, and revenge no longer matters. The message? Tell the truth! Ultimately, both characters seem ready to connect with other people once again.

Characters study a bottle of Jagermeister liquor (they note the various symbols on the label).

In the first part of the movie, the characters drink almost an entire bottle of Jagermeister, getting fairly tipsy; this is presented very much as a social ritual.