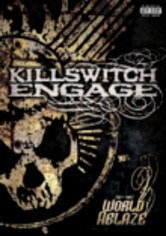 2005 NR 2h 54m DVD
This hard rockin' video delivers live footage captured at Killswitch Engage's 2005 sold-out appearance at the Palladium in Worcester, Mass. Hard-core metal fans won't be disappointed with features that include all of the band's videos, on-the-road and behind-the-scenes footage, extensive interviews, a retrospective documentary and interviews with other bands from Ozzfest 2005.