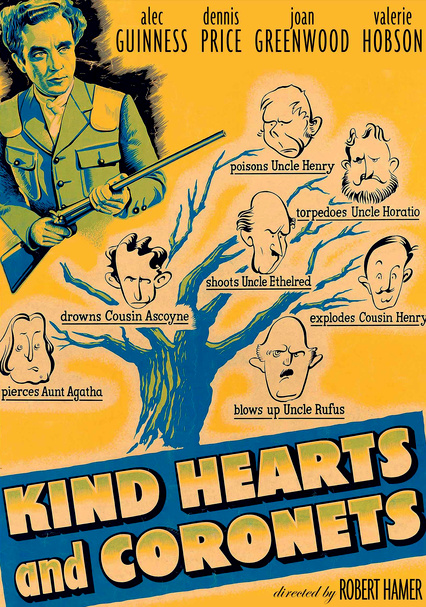 1949 NR 1h 46m DVD
Alec Guinness portrays eight different members of the D'Ascoyne clan, a wealthy family that is being bumped off one by one as a disowned scion, Louis (Dennis Price), murders each heir in his way of inheriting the bloodline's dukedom and fortune. Guinness is mesmerizing in this black comedy as he disappears into each various role -- young and old, male and female. Valerie Hobson and Joan Greenwood co-star as Louis's divergent love interests.

Parents need to know that this story revolves around murder and relies heavily on dialogue. Adultery is also a discreet, but obvious theme and a racially-insensitive version of a children's chant is recited. But what makes the movie particularly unsuited to younger kids is its verbosity. Even teens may find that all the talking taxes their patience, but those who can absorb all the dialogue (and understated, dry English wit) will be rewarded with a classic black comedy.

Adultery is a discreet but obvious theme.

Although a half dozen people are killed, there's no on-screen mayhem.