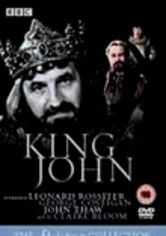 1984 NR 2h 0m DVD
Assuming the throne after the death of his brother Richard I, King John (Leonard Rossiter) finds his rule threatened by his own family. His nephew Arthur's quest for power, fueled by Arthur's mother, Constance (Claire Bloom), gathers support from King Philip of France. As battle lines are drawn, the stage is set for John's destiny. Directed by David Giles, this staging is part of a BBC series of Shakespeare's complete works.