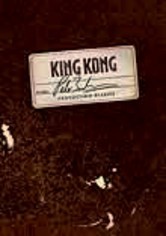 2005 NR 2 discs
Oscar-winning director Peter Jackson presents a collection of video diaries filmed during the making of his epic King Kong remake, featuring quips and quotes from stars Naomi Watts, Adrien Brody, Jack Black and Andy Serkis (who famously starred as Gollum in the Lord of the Rings trilogy). This behind-the-scenes look at a mammoth movie that took eight months to produce offers a new appreciation for Hollywood blockbusters.