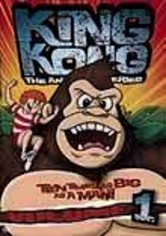 1966 NR 2 discs
Animators Arthur Rankin Jr. and Jules Bass -- who delighted generations of children with their stop-motion classics Rudolph the Red-Nosed Reindeer and Santa Claus Is Coming to Town -- produced this short-lived cartoon series, which was based in part on the 1933 film. A collection of episodes follows the adventures of a decidedly kinder King Kong, who aids a scientist and his two children in their fight against an evil doctor.