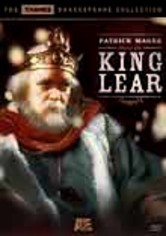 1974 NR 2h 0m DVD
King Lear (Patrick Magee) puts his life in the hands of his devious daughters in this production that originally aired on Britain's Thames Television. After disowning loyal daughter Cordelia, Lear gives up his throne and divides his entire kingdom between his two eldest, Regan and Goneril. But the power-hungry princesses turn nasty, eventually forcing their father out of the castle. Can Lear correct his error before it's too late?