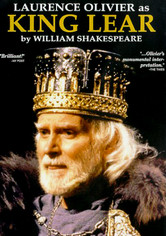 1984 NR 2h 38m DVD
Having sent his loving daughter Cordelia (Anna Calder-Marshall) into exile, King Lear (Laurence Olivier) finds himself stripped of his status, his belongings and his pride by his other daughters in this British TV adaptation of one of William Shakespeare's best-known dramas. Playing the role of a lifetime, Olivier turns in an Emmy-winning performance as the Bard's tragic hero. Diana Rigg, John Hurt and Leo McKern provide superb support.