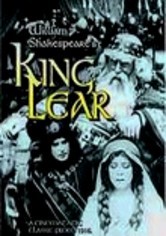 1916 NR 1h 4m DVD
This successful silent version of William Shakespeare's classic tale of an elderly patriarch and his three daughters was made in 1916 and features theater thespian Frederick Warde in the physically and emotionally challenging role of King Lear. Unlike the broad stage actors of this era, Warde gives a restrained, quietly powerful performance for the camera, capturing the complicated essence of Lear.