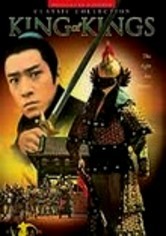 1969 NR 1h 37m DVD
Known as the best swordsman in all of China, the recently appointed security escort for the Imperial Governor is challenged to a duel and cut down before his family's eyes. The victor, known only as The Thunder Sword, vanishes as mysteriously as he appeared, leaving behind two orphans hungry for revenge. The children grow up honing their fighting skills in the hopes that one day they'll get to avenge their father's untimely demise.