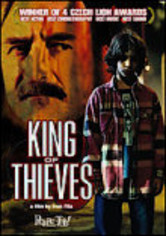 2004 NR 1h 49m DVD
When his poor Ukrainian parents sell him to a fast-talking circus promoter named Caruso (Lazar Ristovski), 10-year-old Barbu (Yasha Kultiasov) thinks he's moving on to a fabulous new life. But the minute the boy arrives in Berlin, he learns that Caruso is nothing more than a hustler. Things only get worse when Barbu hears that his sister (Julia Khanverdieva) has been sold into prostitution. Can he save her before it's too late?