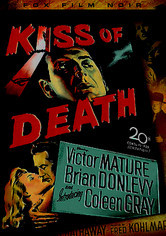 1947 NR 1h 38m DVD
Richard Widmark nabbed an Oscar nod for his memorable debut role as a sadistic mobster in this classic crime noir. Caught red-handed during a heist, two-bit hood Nick Bianco (Victor Mature, in a stellar turn) refuses to rat out his underworld pals but turns stoolie after they renege on a promise. Coerced by the prosecutor to get the goods on hit man Tommy Udo (Widmark), Bianco gets chummy with him but becomes Udo's mark when he beats the rap.