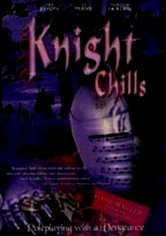 2001 PG-13 1h 30m DVD
When a young man is shattered by unrequited love for one of his fellow role-players, he's thrown into despair and commits suicide. But for the other players, the despair has only begun as one by one, a mysterious black knight strikes them down. Knight Chills weaves together the stories of those accused, those abused and those who test fate by playing a harmless game with a deadly reputation.