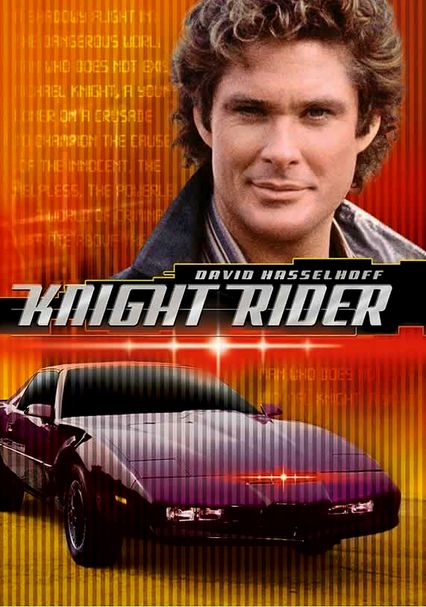 1982 TV-PG 4 seasons
Left for dead but saved by a mystery benefactor, heroic superhunk Michael Knight has a new face, a new mission and a new car: K.I.T.T., an armored Trans Am with a voice of its own. Together they form a crime unit no crook can outrace.

David Hasselhoff stars as a police detective, injured in the line of duty, who reemerges with a new face and name: Michael Knight. Now, Knight fights crime for a clandestine organization with his supercharged talking car, K.I.T.T.

Michael Knight returns for another spate of adventures with his intelligent, turbo-charged Trans Am, K.I.T.T. Backed by technology expert Devon and mechanic April, Knight takes on all kinds of bad guys in his quest for justice.

Michael and his car K.I.T.T. are still fighting baddies on behalf of Knight Industries in Season 3. Michael competes in an illegal street race, while K.I.T.T. faces off with his alter ego, K.A.R.R., as well as a menacing monster truck.

Hired to root out evil in the name of justice, Michael Knight can't get the job done with out his super car, K.I.T.T. In Season 4, K.I.T.T. gets a makeover, emerging smarter and faster. Meanwhile, Michael has to get used to his old car's new tricks.

Parents need to know that one of the main characters of this show is a car that can -- and often does -- zip along at 300 mph, jump over ditches, shoot flames, and many other daredevil exploits. Kids, who are probably the most likely to enjoy the show these days (although even they may be turned off by the now-dated effects and production values), may plead with their parents to emulate the show's questionable traffic habits ... or at least to buy them toys that will let them pretend to do it themselves.

Many episodes include a romantic subplot, but the main character's love life remains offscreen.

Michael and KITT are dedicated to fighting crime and injustice, and every episode centers on their ongoing crusade to uphold law and order.

Some characters smoke and drink, but rarely to excess.