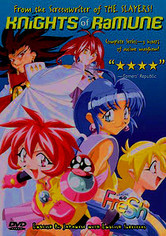 1999 NR 3h 0m DVD
Somewhere in one of those galaxies far, far away, Holy Virgins Cacao and Parfait must find the prophesied Champion of the Galaxy to prevent the destruction of the universe. Unfortunately, the Champion turns out to be a power-obsessed tyrant! With the help of a plucky orphan, a giant robot and their Holy Magic, the two heroines fight to save the galaxy from its greatest hero.