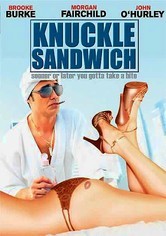 2004 NR 1h 30m DVD
Former football hero Carter Simms's (Douglas Callan) charmed life turns into a nightmare when he loses his high-paying job and his girlfriend (Brooke Burke) in this witty comedy. Moving back home to Georgia, he finds it hard to readjust to the small town. But during his forced break from the rat race, he learns a thing or two about life. Morgan Fairchild, John O'Hurley and John Kapelos co-star in this witty comedy.