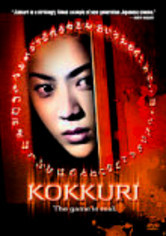 1997 NR 1h 27m DVD
After listening to a radio séance that purportedly conjured the spirit of a ghost named Kokkuri, schoolgirls Mio (Ayumi Yamatsu), Hiroko (Hiroko Shimada) and Masami (Moe Ishikawa) receive a chilling prognostication: One of them will die before reaching age 17. When the impressionable girls start turning on one another, it triggers a string of disturbing incidents in this hypnotic suspenser directed by Takahisa Zeze.