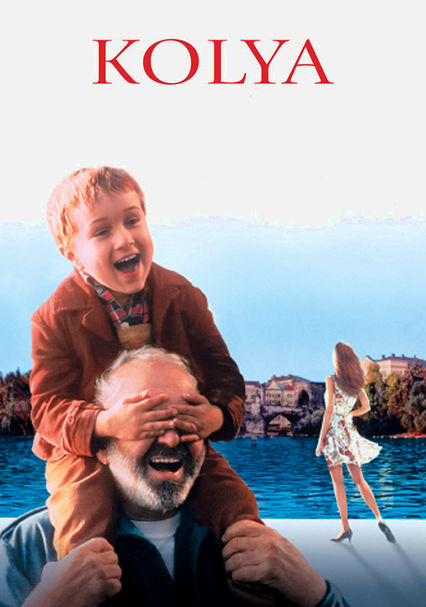 1996 PG-13 1h 45m DVD
In communist Czechoslovakia, middle-aged concert cellist and bachelor Frantisek Louka (Zdenek Sverak) is strapped for cash, reduced to playing funerals, when a chance relationship results in his caring for a 5-year-old Russian boy, Kolja (Andrei Chalimon). Political turmoil is imminent on the eve of the Velvet Revolution, while Louka's own emotional upheaval is just as unpredictable in this heartwarming, Oscar- and Golden Globe-winning tale.

Parents need to know that Kolya is an Academy Award winner for Best Foreign Language Film, and while it has some very kid-friendly themes involving an adorable 5-year-old, the movie involves mature subjects, as well. The central adult character is quite a womanizer and while sex is never shown, there are lots of rumpled sheets and bare legs in the picture. There's also lots of drinking and smoking (it's Europe in the late '80s) and a smattering of swearing (including "s--t") in the subtitles. The subtitles go by pretty fast, too. Fast reading skills and a little background on what was happening politically in Czechoslovakia in 1988 will help younger foreign language fans fully appreciate this lovely film.

Nonsexual full-frontal nudity as 5-year-old Kolya gets in and out of the bath multiple times. Louka entertains women frequently in his loft, once after dumping Kolya in the bathtub and shutting the door. You only see trysts afterward with couples under rumpled sheets, discarded underwear, and exposed legs. Some lewd behavior in the back of a church, grabbing a suitor's butt and using a cello bow to lift up her skirt. Plus more innuendo on the phone and cat-calling girls while driving down the street. Louka makes piggish drunken comments to arranged-marriage wife about how he'd like to give her a real wedding night -- lucky for her she doesn't speak Czech.

Kolya's grandmother dies from a stroke -- Louka finds out by visiting the hospital but only tells Kolya she's "sleeping"; the boy is very distressed. Kolya also gets very sick and lost on the train for most of a day. Russian tanks are a constant feature in front of Louka's mother's house. Louka is interrogated and threatened with imprisonment. Kolya goes to so many funerals where Louka plays his cello that he's always drawing coffins or building them for a puppet theater.

See beyond prejudice and be responsible enough to care for the most vulnerable.

Set in Europe in the late '80s, so smoking and drinking are both quite prevalent. There's drinking and smoking at dinner and after sex. One of the interrogators is such a heavy smoker the butts topple over in his ashtray. A bottle of alcohol is visible on the floor of the church during a funeral service. Louka says some piggish things while very drunk.