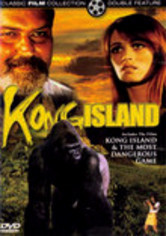 1932 NR 2h 35m DVD
Adventure is the name of the game in this twin bill of B-movie classics. In Kong Island, a deranged scientist conducts experiments on gorillas, transforming them into robotic slaves. Can a shapely jungle girl foil his dastardly plans? The Most Dangerous Game features Leslie Banks as a big-game hunter who stalks shipwrecked "guests" through his fog-enshrouded isle in a battle for survival; Fay Wray and Joel McCrea also star in this taut thriller.