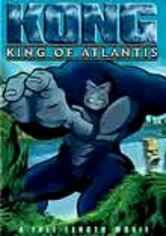 2005 NR 1h 9m DVD
In this mind-blowing animated tale, scientists who have harvested genetic material from the original King Kong produce a brand-new ape that can be fused with a human named Jason, creating a half-man, half-beast creature. With the lost city of Atlantis on the rise from its watery grave, the malevolent Queen Reptilla entreats Kong to become the island's new king … but can Jason convince his hairy counterpart that it's just a trap?