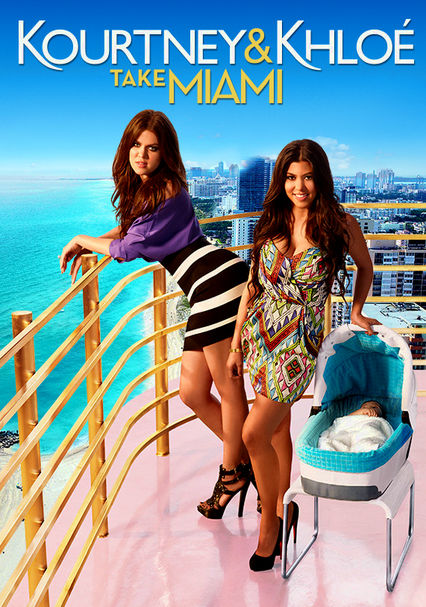 2009 TV-14 1 season
Icons of high-rent reality royalty Kourtney and Khloe Kardashian descend on glitzy Miami to open a new branch of their boutique while simultaneously blazing a trail through the city's nightlife. Khloe even hosts her own late-night radio show.

While opening up a new branch of their Dash boutique in Miami, Kardashian sisters Khloe and Kourtney try to keep their tempers in check, mentor their young employees, find romance and party until they drop. A spin-off of "Keeping Up with the Kardashians," this E! reality series finds Khloe hosting her own late-night radio show and Kourtney debating whether or not to reunite with her ex-boyfriend Scott.

Parents need to know that teens won't glean many positive messages from Kourtney and Kim Take Miami (formerly Kourtney and Khloe Take Miami), a brand-heavy reality show that largely continues the antics of Keeping Up with the Kardashians. Social drinking and sexual innuendo play heavily in the proceedings, and the girls sometimes overindulge to the point of illness, memory loss, and poor decision-making. They also speak frankly about sexual matters, spouting sentences like "It's so obvious she wants her vajayjay" and "I do not need to see someone's balls if I'm not boning him." Obviously, the language in general is pretty salty, with bleeped swearing and audible insults like "bitch-ass whore."

Lots of sexually charged kissing and "hooking up" in bars and clubs -- and, in one instance, Kourtney kisses a bisexual girl she met in her art class. The girls also throw around sexual terms like "butt plug," "vajayjay," and "balls," Khloe interviews a "sex expert" on her radio show; one episode features her trying to remove Kegel exercise items items from her vagina (though no nudity is shown).

Occasional disagreements lead to some yelling and slamming doors, but nothing violent. Alligator hunting is featured in one episode.

The show sends teens negative messages about drinking and partying, even though the sisters are old enough to imbibe. It also glamorizes the sisters' high-rolling lifestyles and sets some unrealistic beauty standards.

The sisters' D-A-S-H boutique (where a dress can cost as much as $500 or more) is heavily promoted, and about half of the action takes place in the store. They also drop cash for luxury brands like Jaguar, Porsche, and Christian Louboutin shoes.

The sisters (who are all of legal age) frequent bars and clubs, do shots, and often overindulge -- sometimes to the point of vomiting and/or not being able to recall how the evening ended. In one episode, Khloe finds a vial of cocaine in a dressing room and brings it to work. But as a result, her radio show is suspended, and she's forced to take a drug test.