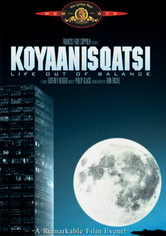 1983 NR 1h 27m DVD
Koyaanisqatsi, which marks Godfrey Reggio's debut as a film director and producer, is the first installment of the Qatsi trilogy. The title is a Hopi Indian word meaning "life out of balance." Created between 1975 and 1982, the film is an apocalyptic vision of the collision of two different worlds -- urban life and technology versus the environment. Philip Glass composed the film's musical score.