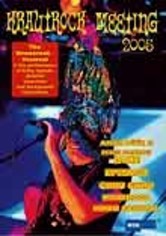 2005 NR 3h 37m DVD
The musical phenomenon known as Krautrock -- a term coined more than 30 years ago by British radio DJ John Peel to describe the avant-garde music coming out of West Germany in the late 1960s and '70s -- has influenced a range of modern artists, from Brian Eno to Afrika Bambaataa. This collection explores the classic Krautrock groups many Americans may not be familiar with, including Amon Düül II, Guru Guru, Karthago and Peter Pankas Jane.