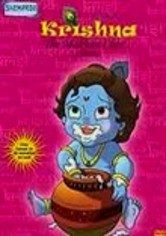 2006 NR 2h 30m DVD
This charming animated film from India follows the childhood adventures of the deity Lord Krishna. Living in Gokul with his foster parents, Nand-Lal and Yashoda, the lovable little Krishna gets into all kinds of mischief, including filching butter and goofing around with his brother Balaram. But some of his exploits are more serious, such as fighting off the vicious demons sent by his uncle King Kansa, who fears the child's power.