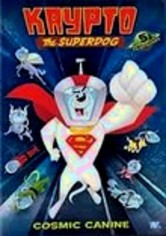 2005 NR 1h 50m DVD
Spun off from the ever-popular Superman franchise, this animated adventure series chronicles the exploits of a courageous canine from Krypton, the Man of Steel's home planet. Adopted by young Kevin Whitney after landing on Earth, superdog Krypto and his superpet compatriots -- who include Ace the Bathound and Streaky the cat -- battle malevolent forces in Metropolis. Volume 1 contains five episodes from the show's debut season.

Parents need to know that this is a fairly innocuous cartoon about a superhero dog (originally owned by Superman) who, along with his coterie of companions, saves the city of Metropolis from an array of villains. Each half-hour episode is broken down into a pair of shorter stories, making this a good length for younger viewers; the action is suitable for the little ones as well, since the bad guys get theirs, but in a pretty tame fashion -- often tangled up in their own tails or scared right into a cage.

Cartoon hijinks and exaggerated shenanigans, though no one ever really gets hurt; plenty of funny sound effects when villains get caught.

Heroes use words to solve problems whenever possible; characters work to overcome their own shortcomings.