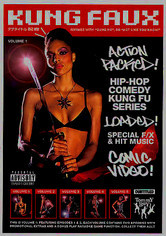 2000 NR 1h 0m DVD
Some of Tommy Boy's most notorious MCs -- including Queen Latifah, De La Soul, Prince Paul and the Force MDs -- rock the mic in unexpected ways in this hilarious volume of kung fu funnies that originally aired on Comedy Central and Much Music. By adding overdubbed dialogue to classic martial arts films, these artists put a fresh spin on otherwise straight footage that was never intended to be so irreverent.