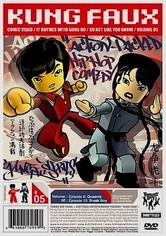 2006 NR 1h 40m DVD
Get ready to laugh with the fifth volume of this hip and hilarious television show. Starting with footage from vintage martial arts films, "Kung Faux" adds a hot new soundtrack, cutting-edge graphics and dialogue from some of the top hip-hop personalities around -- including De La Soul, Biz Markie, Afrika Bambaataa, Naughty By Nature, Prince Paul and Queen Latifah. The result is a sidesplitting new take on the classic kung fu genre.