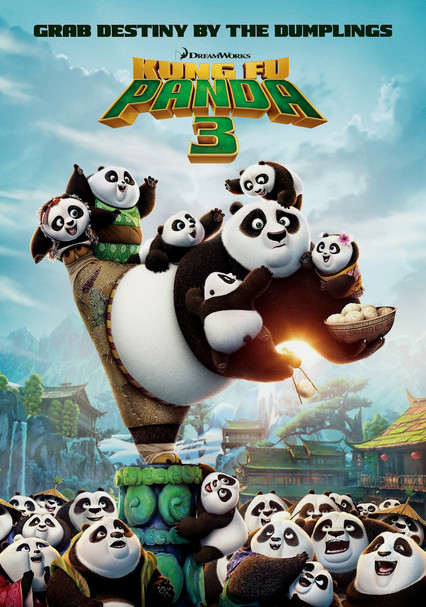 2016 PG 1h 35m Blu-ray / DVD
After Po is reunited with his long-lost dad, the two set off for a secret panda village, where Po must quickly teach his brethren the art of kung fu when a villainous ancient spirit named Kai threatens all of China.

Parents need to know that Kung Fu Panda 3 is the third movie in the hit series about unlikely martial arts hero Po (voiced by Jack Black) and his friends, the Furious Five. This time around they face Kai, a scary supernatural bull monster that menaces all of China. Po and the others must fend him off in a series of frequently intense battles that may scare kids; some could also be upset by flashback scenes of parent-child separation, conflict between characters, and moments when it seems like key characters are captured, in danger, and/or possibly gone for good. Expect a little insult language ("stupid," "loser," etc.) and potty humor, but aside from the violence, there's not much to worry about in this effective, entertaining story about family ties (Po meets his long-lost biological father) and establishing your identity. Blended families may particularly like the way that Po's two-dad situation is handled.

Lots of martial arts fighting, both in groups and one on one. Villain Kai, an angry supernatural bull monster, is intense and scary, as are his jade warriors. Sad flashbacks to Po's separation from his mother when he was a cub. Key characters are captured/in danger. Po makes a big sacrifice that could upset some kids. Additional creative fighting via the use of Chinese food -- spring rolls, dumplings, etc. -- as well as nun-chucks and other means of attack. Perilous trek to panda village. Slapstick falls/crashes.

Infrequent use of words including "stupid," "butt," "loser," "idiot," and "shut it." Some bathroom humor.

Strong message about identity -- finding your true self, what you're best at, and what you love. Po is told by Shifu: "If you only do what you can do, you will never be more than you are now." And you should be and embrace who you are, not who someone else is. Also, family is more than biology; it's accepted that Po has two dads. While violence remains the main means of conflict resolution, the pandas fight the bad guy with a coordinated effort that involves lobbing food (and themselves!) more than weaponry.

No product placement within the film, but plenty of offline merchandise tie-ins, including toys, games, books, and more.