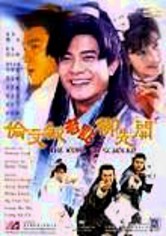 1993 NR 1h 31m DVD
Aaron Kwok (The Storm Riders) stars in this hilarious kung fu action-fantasy spoof! When Lun (Kwok), a young scholar, witnesses his teacher being chased by an assassin, he suspects that the teacher is actually a special agent being hunted by the feared East Chamber eunuchs. Lun and his fellow classmate/kung fu master Liu (Dicky Cheung) agree to team up and help their teacher by fighting against the renegades.