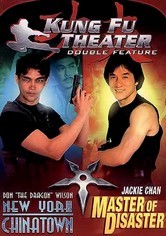 1986 NR 1h 27m DVD
As a notorious triad gang takes over the streets of Chinatown, Don "the Dragon" Wilson (the world karate champion in his first starring role) must join forces with partner Melvin Wong to take back the turf. A vicious bloodbath of power-punching showdowns, violent knife fights and gangster gunfire fill this thrilling action revenge epic from the Kung Fu Theater series.