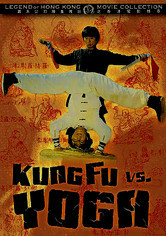 1979 NR 1h 30m DVD
To win the heart of an alluring woman known only as Ting, two fighters, Gung Fu (Yat-sun Chieh) and Mun Seng (Alan Hsu), agree to take each other on in a noble martial arts battle to decide who wins Ting's heart. But there's a catch: Awaiting the winner in the wings is another suitor -- a yogi named Singh (Dupar Singh) who boasts calm, flexibility and strength, three traits that, combined, prove to be just as potent as the duo's fighting skills.