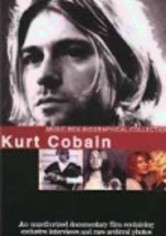 2005 NR 1h 1m DVD
Years after his tragic death at age 27, Kurt Cobain remains the crown prince of grunge. This documentary examines his rise from the trenches to the throne, a journey that began in his humble hometown of Aberdeen, Wash., and ended with his death from a self-inflicted gunshot wound, a loss felt around the world. The film features never-before-seen footage from Nirvana's heyday, as well as interviews with friends and relatives.