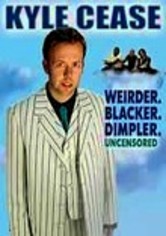 2007 NR 1h 7m DVD
Ah, to be young and twisted. Kyle Cease, who became a pro stand-up comic at age 12, expounds on such offbeat topics as hibernating midgets and racist school assemblies in this hilarious comedy performance at Seattle's Moore Theatre. Winner of the International Giggles Comedy Competition at age 16, Cease also had a hit with his first Comedy Central special, which became one of the network's most-watched programs ever.