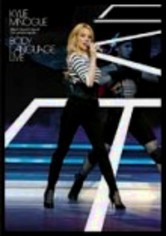 2004 NR 1h 0m DVD
Captivating songstress Kylie Minogue wowed the audience in this 2003 concert filmed at London's Hammersmith Apollo. Minogue's performance emphasizes her album "Body Language," and the extras include multi-angle screen visuals for "Slow" and "Chocolate" plus a behind-the-scenes documentary. Songs include "Red Blooded Woman," "On a Night Like This," "After Dark," "Obsession," "In Your Eyes," "Secret," "Spinning Around" and more.