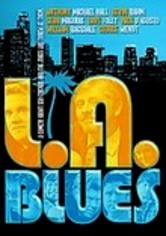 2007 R 1h 38m DVD
Screenwriter Ian Gurvitz also directs this independent dramatic comedy about six friends (Anthony Michael Hall, Dave Foley, Kevin Rahm, Sean Maguire, Nicholas D'Agosto and William Ragsdale) who routinely gather at a Hollywood blues bar to grumble about their problems. They've survived divorce, alcoholism and addictions to gambling. But the real mystery is how one of them ended up on a gurney as the result of an apparent suicide attempt.