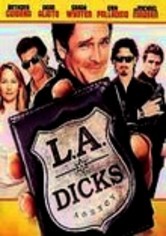 2006 NR 1h 30m DVD
Two cops compete against a group of detectives in a battle to become Hollywood's newest stars in this biting comedy set in Los Angeles. It's winner take all as the cops and the dicks fight for fame, and the competition turns chaotic thanks to a meddling psychic, blackmail and script issues. Michael Madsen, Erik Palladino, Sarah Wynter and Anthony Guidera star in this edgy comedy where private eyes hope to make it big in the public eye.