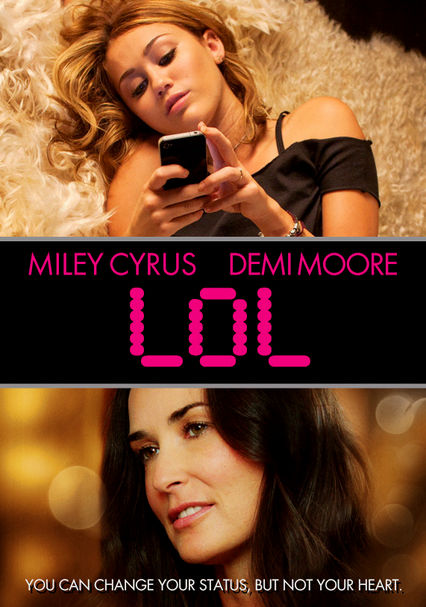 Parents need to know that LOL stars Miley Cyrus in the American adaptation of a popular French coming-of-age drama that tackles mature topics including teen sexuality, drug experimentation, divorce, and parent-child relationships. Younger fans of Cyrus' Disney series Hannah Montana might be curious to see her first role since The Last Song, but be warned that the adolescent themes are really heavy handed. While not raunchy like an American Pie-type comedy, much is made of losing virginity, hooking up, sexting, and even trying to seduce a hot teacher. And it's not just teens having sex and doing drugs (marijuana) and drinking -- the adults do it, too. Language is common but not constant ("s--t," "a--hole," "bitch," etc.), and the visible products are mostly technology-related (MacBooks, Facebook, smartphones).

Teens engage in various levels of sexuality -- from daydreaming about the attractive math teacher to discussing hook-ups to passionate making out and losing their virginity. One couple kisses half clothed in bed a few times, and then goes all the way (a condom is used). A girl hooks up with a guy in a bathroom stall (noises are heard, but nothing is seen). Divorced parents continue to have sex (although it's never shown). One girl is labeled a "post it note," because she "sticks" to any guy who lets her. A girl's caller ID on her boyfriend's phone is displayed as a photo of her bra-clad breasts. Two adults make love (the shirtless man lies on top of the woman, who's wearing a bra). A mother comments on her teenage daughter's Brazilian wax, saying "I don't want my daughter looking like a porn star."

A father gets angry at his son for getting poor grades and pushes him and smashes his guitar. Lola is upset that her ex-boyfriend calls her a "ho," so she starts shoving and slapping him until another friend intervenes; they're all sent to the principal's office.

LOL encourages communication between parents and their teens and shows the consequences of lying. But lots of negative behavior also comes without consequences.

All of the teens in the movie seem to own the same MacBook Pro laptop. Facebook is mentioned or shown a few times; a friend of Lola's drives a Vespa.

Regular alcohol and marijuana consumption by both teens and adults in social situations. In one scene, guests at a dinner party pass a joint in the presence of an off-duty narcotics officer, who doesn't seem to have a problem with it. Adults also smoke cigarettes. A grandmother asks a teenager at a party for a hard drink and then passes out from it.