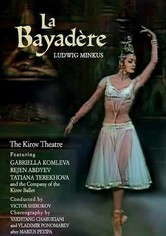 2008 NR 2h 10m DVD
Filmed on the legendary stage of its 1877 premiere, this landmark Kirov Ballet performance of the Russian classic, conducted by the masterful baton of Victor Shirokov, stars Gabriella Komleva, Rejen Abdyev and Tatiana Terekhova. Based on the verses of an ancient Indian poem, this powerful epic follows the tragic, star-crossed romance between an indentured temple dancer and a noble prince.