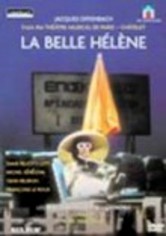 2004 NR 2h 6m DVD
Offenbach's light-hearted three-act opera puts a twist on Homer's ancient story of "the face that launched a thousand ships" -- Helen of Troy. The opera satirizes the social mores (obsession with sex and lack of obsession with morality) of the Parisian upper classes during the Second Empire. This production stars Felicity Lott, Francoise Le Roux, Michel Senechal and Yann Beuron.