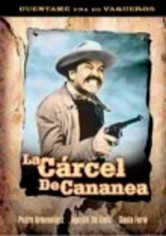 1960 NR 1h 19m DVD
This Spanish-language thriller pits an honest cop (Pedro Armendáriz) against a man (Agustín de Anda) who's been wrongfully convicted of murdering the father of a local girl. Determined to clear his name, the convict escapes from jail, emboldened by his desire to find the true killer. The detective faces the difficult task of bringing the prisoner back -- dead or alive. Ultimately, he decides to join his nemesis's crusade to seek justice.