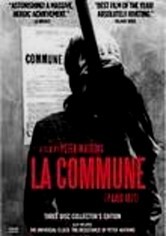 2000 NR 2h 44m DVD
Director Peter Watkins tells the story of the historic Paris Commune of 1871, whose members formed a spontaneous revolutionary government to challenge the established order during the Franco-Prussian War. The docudrama re-creates the events, inserting dueling modern-day camera crews to tell both sides of this important moment in history, one following the revolutionary movement, the other bowing to the official party version.